Do you love intimate, charming stays? Are you looking for a romantic, sophisticated accommodation in the center of Rome? Do you want all modern comforts with a special consideration for design? The BDB Luxury Rooms San Pietro, luxury guesthouse near the Vatican, is the right answer for you.

Made up of three different rooms in an apartment placed on the first floor of a historic building, the BDB San Pietro strikes for its attention for details and contemporary taste, with handcrafted furnishing, luxurious furniture, mosaics and paintings on the walls. Sophistication and elegance distinguish all the rooms: the Standard Double and the Deluxe Double room for two as well as the Family Four-Bed room able to accommodate up to four people.

For the rooms we have chosen valuable materials which give the spaces a one-of-a-kind, rare appearance conveying to the guests the feeling of staying in a sparkling of art, design and maximum comfort. Luxury also applies to the room equipment, which includes free Wi-Fi, air-conditioning, heating, minibar, LCD TV with satellite channels, safe and coffee maker. 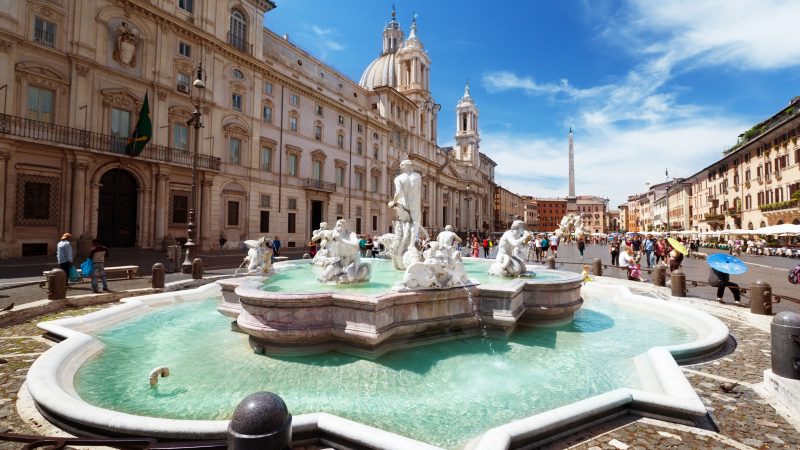 Piazza Navona is one of the most beautiful and renowned square in Rome. It was built by the Pamphili family; noble family of Rome intertwined with political and papal life in the period of the sixteenth and seventeenth centuries. Pope Innocent X (Giovanni Battista Pamphilj, a member of the prestigious family) had the square built with a monumental style. Piazza Navona is one of the most important symbols of Baroque Rome. The square houses some artistic and architectural elements of great value. At the center of the square there is the Fountain of the Four Rivers by Gian Lorenzo Bernini. It represents the four corners of the earth: the Rio della Plata, the Nile, the Ganges, the Danube. Opposite the Bernini fountain is the church of Sant'Agnese in Agone, a work by Francesco Borromini and Girolamo Rainaldi. Finally, the square also houses the Palazzo Pamphilj, a majestic work erected between 1644 and 1650 by Girolamo Rainaldi. The gallery, inside the palace, contains frescoes by Pietro da Cortona. Other prestigious buildings that surround the square are: Palazzo Braschi, Palazzo De Torres, Palazzo Tuccimei; all monumental buildings dedicated to ancient and influential Roman families. ...read